Alexandra Howell joined Archer, Byington, Glennon & Levine in September of 2015.  Her practice is focused on all aspects of labor and employment law litigation, grievance arbitrations, employee discipline cases, and improper practice charges.   She regularly practices before the NLRB on behalf of clients and actively manages cases in federal and state courts.

Alexandra earned a Bachelor of Arts from the State University of New York at New Paltz in 2006 with magna cum laude distinction.  While at S.U.N.Y. New Paltz, she spent time working for the Hudson Valley Area Labor Federation, and developed an interest in the issues affecting working families.  After college, and throughout law school, she worked locally as a Research Analyst with the Long Island Federation of Labor.  During this time, she assisted in the launch and development of a labor leadership training program that continues to exist today.  She testified before the Nassau County Legislature in support of union jobs and responsible economic development.  She also drafted speeches, newsletters and editorials concerning local labor issues.

Alexandra attended the City University of New York School of Law from 2007-2010. While at C.U.N.Y., she worked as a Staff Editor for the New York City Law Review, and a Teaching Assistant for the Writing Center.  She completed internships with the National Labor Relations Board, both with Region 29 and with the Division of Judges.  She interned with the Queens County District Attorney’s Office in the Homicide Trials Bureau.  Alexandra was the recipient of a Charles H. Revson Fellowship for public interest work in 2008, and received scholarships from the New York City Bar Association and the Brandeis Association in 2009.

From 2013 through 2015, Alexandra worked in private practice, where she focused primarily on labor and employment law matters.  Alexandra handled cases before state and federal courts, the New York State Division of Human Rights, the Equal Employment Opportunity Commission, and the New York City Office of Collective Bargaining.

Alexandra serves as an  Adjunct Professor with the C.U.N.Y. School of Law, assisting graduates prepare for the bar exam. 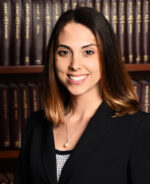