Prior to joining the firm, Paul worked as in-house counsel to a large labor union where he advised and represented the union, its affiliated locals, and individual members in arbitrations, litigation, mediations, and proceedings before the New York State Public Employment Relations Board (“PERB”), the National Labor Relations Board (“NLRB”), and other administrative agencies. In addition, he served as an intern at the U.S. Equal Employment Opportunity Commission (“EEOC”).

Paul received a J.D. from New York University School of Law in 2012 and is a Peggy Browning Fellowship recipient.  Paul received a B.S. in Industrial and Labor Relations from Cornell University in 2009.  He is a member of the New York bar.

Paul became interested in labor issues while working as an airport line technician and has represented the interests of unions and workers for the entirety of his legal career. 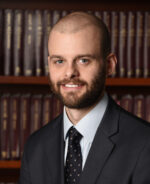