Marty Glennon is a founding partner at ABGL.  He has a long and active family history in the labor movement. Prior to becoming an attorney, Marty worked as a union electrician with Local #3, I.B.E.W. for 10 years. He is still a dues paying and card holding member of the I.B.E.W. His motivation for going to law school resulted from the political assault on organized labor and working families during the 1980’s. He saw law school as an opportunity for him to move from the picket line and into the courtroom and other forums where labor policy is created.

As an attorney, Marty represents many unions in both the private and public sectors as well as some of their related fringe benefit funds.  He has successfully negotiated hundreds of contracts for his clients and counseled his clients through difficult negotiations and strikes.  He has a well established reputation in the areas of Labor and Benefits Law  as a strong advocate for our clients. He has litigated in both state and federal courts, including at the appellate level in both.

In 1996, while attending law school, Marty  helped establish the Joe Doherty Civil Rights Fellowship. The fellowship continues today and has provided annual scholarships for CUNY Law students who work summers on civil rights issues both here in the U.S. and abroad. He is also a founding member of the Brehon Law Society of Nassau County and has served as its President from 2002 – 2008 and is also a member of the Brehon Council. He was a member of the of the Board of Directors for the Queens County Overall Economic Development Corporation, where he performed pro-bono legal work benefiting Queens county economic improvement initiative. He is a member of the NYS Bar Association and the Labor and Employment departments of the Bar Association. He also serves as a founding member of the Long Island Labor Advisory Council (LILAC), which he helped to develop with other labor leaders, construction contractors, and representatives of various Federal, State and Local governments. LILAC was created to bring together labor, management and government to address issues affecting working families on Long Island.  He also served as Vice-Chairman of the Nassau County Planning Commission for five years.  He is a member of the Long island Regional Economic Development Corporation’s Infrastructure Work Group.

Marty has used his extensive labor law knowledge to influence labor law policies on a Federal, State and Local level. He has also successfully argued before the Second and Fourth Circuits.  He was named to the Inagural Irish Legal 100 in 2008 and was named in 2009 by Irish America  as one of the Top 100 Influential Irish in the United States.  He was also the recipient of the Pat Finucane Award by the Brehan Society for his work on the Northern Ireland Peace Process. 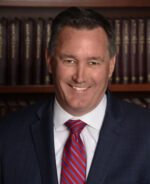